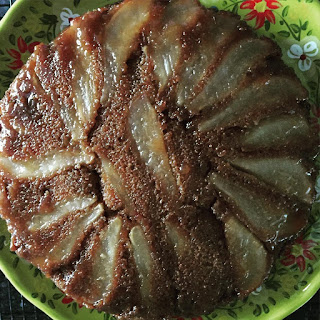 Okay, so when it comes to Dinner Club Night, I am usually on-the-ball.  I plan my assignment (dinner, salad, wine or dessert) well in advance, make sure my schedule is clear and am typically one of the first to arrive.

Last week, our Dinner Club day was switched to Monday, which is not unusual when A. cooks but A. and C. switched turns and this got me all flummoxed up and, damn it, I missed it.

That’s right, you heard me.  I outright, downright, straight-out, categorically missed it.  No excuse other than I wasn't paying attention, which makes me mad because I am told that A. was streaming the music of the Mavericks (I swoon for Raul Malo) and served a delightful chicken and fennel stew. 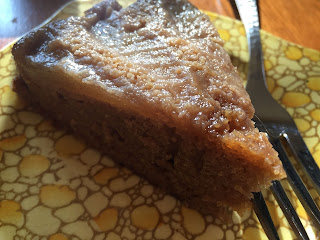 What also makes me mad is that I had an outstanding dessert planned.  I look forward to serving these ladies out-of-the-ordinary desserts because they are so effusive with their praise, which is good for a girl’s ego!

So, on Saturday, since I had all the ingredients (including several very ripe pears), I got up extra early and made the cake I planned to make for Dinner Club dessert….Pear Walnut Upside-Down Cake, from Cooks Illustrated.  I visited my mom later in the day and brought it along...we enjoyed after a nice dinner at a local restaurant that is kind of an institution in the 'hood.  Mother, Sister, and Brother were quite complimentary.  There were no Daughters to be found, but I saved them both a slice.  Lucky girls, because this cake is outstanding….and quite beautiful.  Sort of fancy, not too sweet, and a perfect way to cap off a dinner party.

It's my turn to cook this week...hopefully everyone will show up!

Topping Ingredients
4 Tablespoons butter, melted (I used Kerrygold)
1/2 cup pack dark brown sugar (I used light and it was fine)
2 teaspoons of cornstarch
1/8 teaspoon salt
3 ripe Bosc pears, peeled, halved, cored and sliced (you should get at least 5 slices from each pear)
Honey to drizzle

Topping Directions
Preheat the oven to 300 degrees.  Grease a 9” round cake pan and line the bottom with parchment paper (cut to fit into the bottom of the pan).  Pour the melted butter on top of the paper, and swirling to distribute evenly.  Combine sugar, cornstarch, and salt in a small bowl and sprinkle evenly over the melted butter.  Arrange the pears in a circular pattern around the cake pan with the thinnest edges pointing inward.  Fill the middle with some smaller pieces of pear.   I drizzled some honey on top of the pears.

Cake Directions
Pulse walnuts, flour, salt, baking powder and baking soda in an food processor until the walnuts are finely ground, around 10 pulses.  Transfer walnut mixture to a bowl.

Process eggs and sugar in the food processor until very pale yellow, about 2 minutes.  With the processor running, add the melted butter and oil in steady stream until incorporated.  Add the walnut mixture and pulse to combine, about 5 pulses.  Pour batter evenly over the pears…some may show through, but that’s okay because the cake will cover them up as it bakes.

Bake until a toothpick inserted int the center comes out clean, about 40 minutes.  Let cool on a wire rack for 15 minutes.  Carefully run a butter knife around the sides of the pan to loosen the cake.  Invert the cake onto a wire rack, remove the parchment paper, allow to cool for two hours, then transfer to a serving platter.  Serve with homemade whipped cream, cream fraiche or frozen yogurt.
Posted by KnitOne, PearlOnion at 6:12 AM

KnitOne, PearlOnion
is a whimsical, loosely informative and sometimes sassy culinary and knitting journal. With a little help from friends, I tout interesting tales about good, healthy food and creating beautiful and useful things knitting, cooking and with other functional arts! Sometimes I just tell stories or share experiences that I hope you will find mildly amusing!